A Brief History of KMTI

• In 1987, Michael Simati, a young Kenyan pastor, sent a letter to New Wine Magazine asking for help. Charles Simpson gave the letter to Paul Petrie, director of IOM (International Outreach Ministries). Paul then took a team to Kenya to meet with Michael and evaluate the need.
• In 1989, Paul asked Leroy and Judy Curtis to go with Harmon and Teri Parker to start KMTI (Kenya Ministry Training Institute). They went and began the work 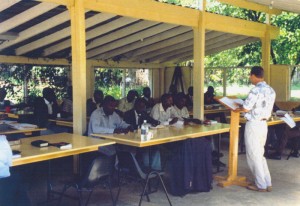 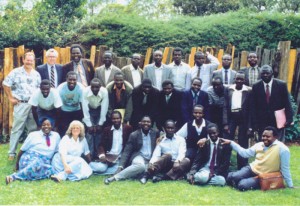 • Over the next few years, the curriculum was written and classes began.
• In 1996, Harmon began the facility building project.
• In 1997, KMTI was up and running from its own facility.
• In 1998, the Neeses arrived to take the baton from Leroy and Judy.
• In 2000, thirty pastors graduated from the Kitale school.
• In 2001, graduates began to plant satellite schools in several locations in western Kenya.
• Over 3000 pastors and church leaders have graduated from KMTI in 27 years.
• Eight satellite schools have been planted.
• More than 1000 churches have been planted by KMTI graduates.
• Students from five East African nations and beyond have graduated from KMTI in the last 27 years.
• UMTI (Uganda Ministry Training Institute) was planted in 2008 by KMTI graduates.
• In 2012, 134 students were graduated in 5 classes, the largest number ever in a year.
• From 2012 to 2016 we graduated 65 pastors with a B.A. in Christian Education.

Our mission is to train pastors and leaders in East Africa: "Change a man, change a village, change a nation."

Our ministry philosophy is to equip pastors and leaders through inductive Bible study: "Teach a man to fish..." (learn how to study the Bible on his own)

We are committed to the spread of the biblical Gospel in East Africa and beyond.

Since 1989 KMTI has trained more than 3000 students in Kenya, Uganda, Sudan, and Tanzania who have planted more than 1000 local churches.